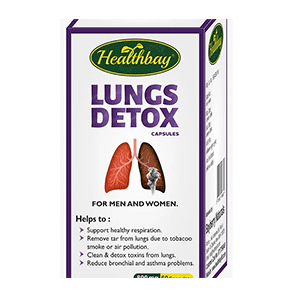 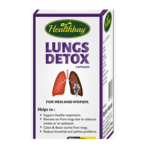 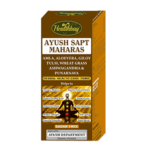 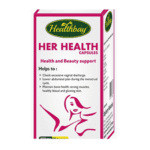 Now a days cities are dealing with a rising level of air pollution and habbits like smoking.Burning tobacco produces a number of chemicals including Nicotine,Carbon Monoxide and Tars,

Smoking or Air pollution causes significant changes in the lungs and airways like more mucus,shortness of breath,wheezing and chronic cough,Asthama.

Tar deposits in lungs and destroys lung tissues overtime and lungs are less able to take in fresh air and let out the stale air.Airways produce excess of mucus that blocks airflow.

Regular detotoxification and cleansing of lungs can help get rid of environmental toxins,tars due to tobacco smoking.It also helps to clear excessive mucus from the airways and improve the circulation of lungs and prevent bad breath.

Healthbay’s lung detox contains the right mixture of high quality herbs , some of which are mentioned below.

There are no reviews yet.

No more offers for this product!

There are no enquiries yet.